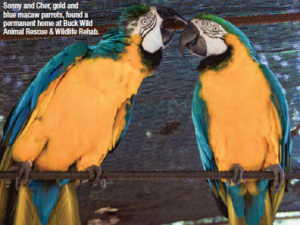 Katie Buck was taking care of animals before she was old enough to take care of herself. “I’ve done it my entire life,” she says. “My grandfather had animals. I was with him daily as a kid while my mom worked. He helped me save animals anytime I would find something injured, sick or orphaned.” Now a veterinary technician, she opened Buck Wild Animal Rescue & Wildlife Rehab in 2016, after securing the necessary licenses.

ALWAYS READY TO HELP
The Ingram rescue is open 24 hours a day every day. Volunteers staff it around the clock, and contributions fund the services the center offers free of charge. The majority of the animals that come in are orphaned newborns who need regular bottle feedings to survive — not just wildlife, but sometimes orphaned puppies and kittens that people discover after other pet rescues have closed for the night. “We have opossums, raccoons, foxes, owls and hawks,” Buck says. “We get ducks, pigeons, all kinds of songbirds and migratory birds. We deal with homeowners who find a baby squirrel or bird that’s fallen out of the nest or a little deer.”

ACCOMMODATING EVERY CREATURE
The rescue is divided into three areas. One of them is specifically for domesticated pets and farm animals, and another is for reptiles. The wildlife enclosures are farthest away from where the people are. “We are not open to the public for tours because with the wildlife, we do as little exposure to humans as we can,” Buck says. “Once the babies are weaned from Sonny and Cher, gold and blue macaw parrots, found a permanent home at Buck Wild Animal Rescue & Wildlife Rehab. the bottle, we try to do as little human contact as possible from then on, so they can transition back to the wild easier.” Animals must meet species-specific benchmarks before release — for instance, birds must be able to fly, and raccoons need to know how to find food. If an animal’s medical needs are beyond Buck’s capabilities, the rescue relies on its relationships with local veterinarians.While the people who bring animals in have the best intentions, sometimes the situation would resolve itself, given enough time. “One of the things we try to stress to the public is calling us first,” Buck says. “In a lot of situations, animals get brought to us that didn’t need to be. That’s a waste of our resources, and it hurts the animal more to be in here than in its natural environment. There’s a lot of cases where people think they’re helping, but it would have been better if they had just called first.”

REAPING THE REWARDS
While the hours are long and the pay nonexistent, the rescue’s crew has formed a tight-knit community around a shared interest.Katie Buck has been taking care of injured and orphaned animals since she was a child. “We’re a family, and we love animals,” Buck says. “Releasing them is a bittersweet moment. As much as we love them, we know the best thing for them is reintroducing them into the wild. It’s just very rewarding to know that we save lives. I thank all of my volunteers for playing a part in saving these animals’ lives. It takes a whole team of us to make this happen.”

A LITTLE HELP FROM HCTC
The rescue relies heavily on its HCTC broadband connection to communicate with volunteers and donors. “It’s absolutely our lifeline to the community,” Buck says. In late July, she discovered that HCTC’s commitment to its members isn’t just lip service. When a lightning strike knocked the rescue offline, HCTC stepped in to help, even though the cooperative didn’t own the damaged equipment. When Buck posted on social media asking for suggestions on how to restore her service, HCTC’s Kerry Sutton reached out to help. After a quick visit from a technician, the rescue was back online. “I knew the problem was somewhere between my house and the office, and that’s all my equipment,” Buck says. “We were just losing money left and right. We weren’t able to do so much. They came and helped me get up and running, and they did it at no charge. I just thought that was so special of them.”