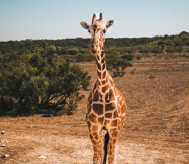 When Byron and Sandra Sadler bought a portion of the storied Y.O. Ranch in 2015, they knew they were getting more than a business — they were investing in a legacy. The Sadlers renamed their land Y.O. Ranch Headquarters, and their staff celebrates the property’s history while embracing the tastes and comforts of today. “There’s an authenticity that goes with the Y.O.,” says manager Eric White. “If you come here, you can still imagine the time when cowboys were rounding up cattle to take to Dodge City. The Y.O. has provenance like only a couple of other commercial operations in the world have.”

A LIVING, BREATHING LEGACY
Well-known as a prime hunting destination, the ranch also has a history of replenishing dwindling animal populations across the globe.
While many Texas ranchers now breed exotics — the term used to describe nonnative species — the Y.O. helped pioneer the practice in the 1950s. “The history of exotics in Texas is really the history of the Y.O. with wildlife,” White says. “We were kind of the original breeders of exotics.”
The ranch is currently home to more than two dozen exotic species.

As ranchers learned which animals thrived in Texas, large herds grew, and they sold the creatures as breeding stock or offered them to paying hunters. In some instances, the population of certain species in Texas exceeds those in the animals’ native countries, putting ranchers in the position of being able to help reestablish dwindling populations half a world away. Ranchers ensure the animals that are returned to their natural habitats go to areas with the infrastructure and ability to protect them and ensure their survival.

“That’s been one of the legacies of exotic breeding,” White says. “One of my first jobs here in 1986 was catching blackbuck antelope. We caught three loads of blackbucks and shipped them back to Pakistan to repopulate. In recent years, Arabian oryx went back to Dubai, and scimitar-horned oryx have gone back to northern Africa.”

A HUNTER’S DREAM
The ranch offers hunters a wide variety of game, from white-tailed deer to zebras, wildebeest and more. The prospect of going home with a new trophy draws in clients from across the U.S. and around the world. “All of our hunting is done with a guide,” White says. “You have a dedicated person with you from the time you arrive to the time you leave.”

RAMBLING AROUND THE RANCH
Hunting isn’t the only way for visitors to see the ranch. For guests who’d rather shoot through a camera lens, there are wildlife and group tours of the 14,000-acre property. In addition to seeing the animals that attract hunters, tourgoers will see llamas, giraffes and rheas, the large, flightless birds native to South America.

Overnight accommodations include cabins dating back to the 1850s. Guests get three meals a day at the Chuck Wagon, and they can enjoy a taste of nightlife on the ranch by sipping a cocktail at The Lodge. There’s also horseback riding, clay pigeon shooting and trails specifically for off-road vehicle riding. “We’re constantly trying to add some activities, in keeping with the ranch’s history, that give people reasons to stay here longer,” White says.