The land where brisket rules 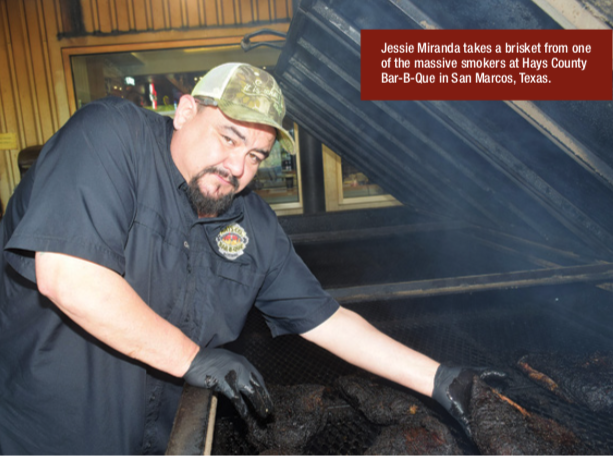 Miranda, general manager of Hays County Bar-B-Que, says it’s the cow that defines barbecue from the Lone Star State — not only the brisket, but ground beef, beef ribs and other bovine cuts. Just follow the smoke signals coming from the massive eatery’s four over-sized smokers, each measuring 30 feet long and 6 feet deep. They roar to life on Monday mornings and keep smoking all week long, producing briskets with the perfect bark, ribs that are fork-tender and sausages with an incredible, smoky/spicy bite.

Committing himself to a life of ’cue is a dream come true for Miranda, who hasn’t always been a full-time smoker. Before starting at Hays County Bar-B-Que, he worked in construction and indulged in his passion in his spare time, making barbecue for the masses on the competition barbecue circuit. His team, S&S Pit Crew, has competed in the San Antonio Rodeo barbecue event, the Houston Rodeo, the Laredo Big Bad BBQ Cook-Off and others around the state. They’ve brought home a few ribbons along the way, but now that Miranda’s been at the restaurant full time for six years, he competes “whenever there’s time.”

Miranda met Michael Hernandez while buying wood for S&S. Hernandez owns Hays County Bar-B-Que with his wife, Asenette, and before long they offered Miranda the job that now has him overseeing quality control, customer service and a team of three employees who are in the pit with him. Post oak is the wood of choice for both competition and in the restaurant. The fact that it grows best in dry soil makes it plentiful in Texas. “And it’s a mild wood that produces smoke that doesn’t overpower the meat,” Miranda notes.

Brisket is customers’ top choice of the meats served at Hays County Bar-B-Que, and it’s also Miranda’s favorite. The briskets smoke for 20 to 24 hours, and the cooks stay up all night with them. The results are obvious in appearance, taste and texture. The outside should have a crisp, blackened bark, while the inside should be tender enough to cut easily without shredding. And the taste? Heaven.

“The key to good brisket is low and slow — over low heat for a long time,” Miranda says. Like many pros and back-yard grillers, Miranda is self-taught, but he follows the example his fellow grillers set. Miranda says working for Hernandez has also increased his knowledge of barbecue. Hernandez put the restaurant on the map, making it one of Texas Monthly’s top 50 places for the best barbecue in Texas. And for a state the size of Texas — where the heat is on, ’cue is king and barbecue restaurants line the roads — that’s no small feat.