Consumers can tap into a rushing stream of content delivered across devices ranging from TVs to smartphones. Sports, news, movies, comedies, dramas, music — the list of options is seemingly endless. But there is a cost. And for many consumers that price increases each spring. If you have it handy, take a moment to review a bill for your TV programming from three years ago. Compare it to today, and in most cases the difference is obvious — television programming is pricier.

The increases are not limited to traditional cable TV providers either. Streaming services have seen prices spike, too. When Google launched YouTube TV, the monthly price was about $35. Now, it’s $65. In cases such as Google, as well as other providers, adding new, desirable content channels helps drive the increases. For traditional networks, investment in higher-quality programming has become essential to compete with streaming services like Netflix, Amazon and HBO Max. Those costs are then passed on to cable providers and their customers. But more content is not always the root cause of the higher prices. In fact, for many providers, such as the rural communications companies serving much of America, the increasing cost of content is an annual struggle to hold prices down. It’s not a push to increase profits, and their efforts to control prices illustrate the give and take behind what you see on your bill. For these companies, only a small portion of a monthly television subscription fee goes to personnel costs, equipment upgrades and tasks such as equipment maintenance. So, where does all the money go?

Much of the cost is wrapped up in agreements allowing TV providers to bring content to you. Networks like ABC, NBC, CBS and Fox regularly renegotiate these agreements. In many cases, these are annual negotiations. A 2019 analysis of cable TV rates by Consumer Reports found that while advertised rates generally increased by 3% to 4% annually, fees for the major networks and channels airing live sports climbed between 8% and 10% each of the previous four years. How are those rates determined? Essentially, the TV provider must pay networks a fixed fee for each subscriber of the service. But each year there are fewer traditional TV subscribers to carry that load. In 2020 alone, about 6.3 million people dropped their cable or satellite TV service, according to investment research firm Moffett Nathanson. Without an expanding subscriber base to offset these increasing costs, TV providers often pass the expense on to consumers in the form of fees added to advertised prices, according to the FCC’s 18th Annual Video Competition Report.

When it comes to these hidden costs, there is one bright spot for consumers. The Television Viewer Protection Act passed at the end of 2019 requires cable and satellite companies to disclose the total monthly price of subscribers’ TV bills, including all individual fees and charges, when they sign up. That transparency won’t make your bill any lower. But it will give you an accurate picture of the full cost of your monthly TV bill. 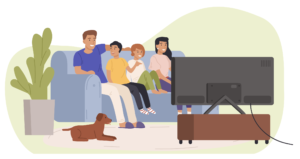