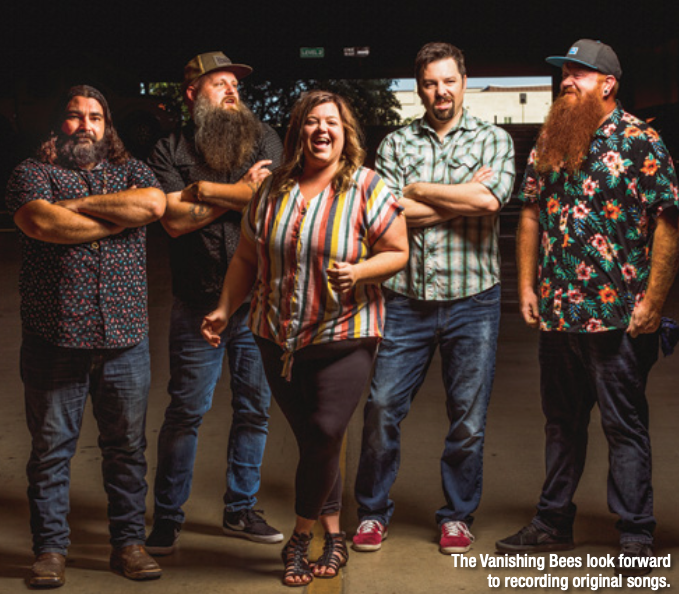 The Vanishing Bees make a promise to the people who come out to see them perform — you’ll never see the same show twice. The musicians pride themselves on making each show a unique audience experience. The musical ensemble’s lineup includes Amber Kinsel, Josh “Red” Colom, Cliff Crawford, Patrick McCorkindale and Gary Thomas. Most of the Bees play more than one instrument, and with the exception of McCorkindale, they all sing — sometimes in four-part harmony. The band often bolsters its sound by inviting former members and other musically inclined friends to sit in for a show or two.

The Vanishing Bees come from a variety of musical backgrounds. Some grew up singing harmonies in church before discovering the Kerrville Folk Festival while others were fans of metal bands, ’90s alternative rock, singer-songwriters, pop acts and beyond. That diversity of experience and influences built a vast repertoire of cover songs from artists like Hall & Oates, Aretha Franklin, The Cure, Prince, Damien Rice, Stevie Wonder, Pearl Jam and Bobby Caldwell, to name just a few. With such an extensive catalog, as well as a handful of original songs, deciding on a set list for a given show is always a collaboration. “We’re also reading the room,” Crawford says. “If you’ve got a lot of older folks, it’s like, ‘OK, let’s do ’60s, ’70s, ’80s,’ and when you see a lot of cowboy hats, it’s, ‘OK, what country songs do we have?’”

CATERING TO THE CROWD

Whether they’re playing at a bar in Kerrville or a private party in Boerne, the Vanishing Bees are music fans, first and foremost. They know what being in the crowd for a great show feels like, and they want to make sure people coming to see them play go home happy. “This is church for us. This is how we refill our soul batteries,” Crawford says. “It fills us with joy and happiness.”

The band has developed a loyal following of fans who travel to see them perform, and they notice, appreciate and reward that devotion. “We have a couple people who come to every single one of our shows,” Kinsel says. “We have Robert — he’s an older gentleman here in town — and we play ‘Twice’ by Little Dragon because we know that that’s his song. We know when he walks in we’re going to do that song, and he knows he can count on us.”

That kind of support means the world to the Bees. “That’s one of the things that keeps us going,” Colom says.

“We want to make sure that when people come to our shows that they get the sense of the family we’re feeling,” Kinsel adds. “I heal through music, I grieve through music, I rejoice in music, I celebrate in music. That’s my whole life. To see people react to us — it is everything.”

Social media is an effective tool to get the word out, but as the band recently learned, its capacity to connect with an audience goes much deeper. The internet proved to be a lifesaver during the early days of the coronavirus pandemic, when the band began livestreaming shows from backyards and living rooms, with fans using apps like PayPal and Venmo to contribute to the virtual tip jar.

“My wife, stepdaughter and I were pretty much out of work,” Crawford says. “We didn’t have any money coming in. I did a few livestreams from my porch, and the love that people showed to me and to us playing at Red and Amber’s house — it literally got us through. Those tips fed my family for a month and a half. I’ve got nothing but gratitude.”

The livestreams stretched past the two-hour mark and were such a success that the Vanishing Bees plan to continue them even after the pandemic has passed. “I’ve had people reach out to me and say they felt like they were hanging out with us in my living room,” Kinsel says. “I’ve had a couple of people say they put it on their TVs while they were doing puzzles with their husband or playing Uno with their kids.”

“We’ve reached a lot of people that can’t typically make it out to our gigs,” Colom adds. “This has given people the ability to tune in and see our live show in a new perspective. That’s been really cool. I think it’s been pretty amazing and pretty eye-opening in a lot of ways.”

The Vanishing Bees have their sights set on a busy future, including recording some original music. “Even if it’s just for posterity’s sake, just to have a medium where our work is immortalized would be great,” Crawford says.

And the experience always means more than the profits. “It’s not so much about the fistfuls of money as it is the smile on our faces,” Crawford adds. “Even if we came back with, like, a hundred bucks apiece after our countrywide tour, it would have been worth it to us.”